My primary object was to look for the persistent slab problem responsible for a cycle of D1.5-D2 avalanches in the Banner Summit zone. I found a persistent weak layer (facets and surface hour) buried 12-14" on some slopes (primarily E-NE-N-NW) at middle and upper elevations - this seems consistent with the depth of the observed avalanches. The overlying slab is thin and the layer does not exist on all slopes, so the instability is not widespread. However, this variability makes assessment difficult, and stepping back in the terrain where it may be found seems like the best approach.

The snowpack at lower elevations and on middle elevations facing the sun was a wet mess. Enough said.

Glassing the ridge from Copper south to Elk Creek revealed a handful of persistent slab avalanches, but they seemed less widespread than what Ben observed near Bulltrout Point.

There were numerous D1 wet loose slides similar to what was seen elsewhere from the rain on snow event.

Lower elevations: 1-2cm thick crust from weak freeze overnight. On a N aspect at 7100', was surprised to find FC 10cm below the surface that were still very weak, dry, and seemingly unaffected by the rain event. Once the surface freezes, it would likely take a large load to create an issue. Coming out in the mid-afternoon, the top 30-40cm was a wet, mushy mess.

Upper elevations: Perhaps due to previous wind effect, upper elevation solars were more supportable and semi-skiable. Lost rain crust on N aspects at around 8500', with surface snow mostly dry but dense above 8700'.

I dug 4 pits at upper elevations on aspects ranging from N to E to look for the persistent slab problem responsible for observed avalanche activity. N aspects at 8460' and 8600': FC and shards of SH found 30-35cm down, but not particularly weak (4F-) or well-defined. This layer produced ECTX or ECTNs in the hard range. NE, 8750': FC not remarkable but a well-developed/standing layer of SH was found 32cm down (see photo). It produced an ECTPV (failed when I set my shovel on column) and an ECTP12 (see video). E, 8800': 10cm thick FC layer much more well-developed and weak (F) - see photo. Some SH shards but FC seemed the problem layer. ECTN12 (x2), ECTP8.

Based on these limited obs from a small area, the current weak layer (FC, SH) is just over 30cm down and maybe more problematic on E aspects than N - at least at upper elevations where many N aspects were wind-affected. It seemed like you needed to be above at least 8000', and maybe closer to 8500', to get out of elevations where a rain crust isn't muting the instability. I think because the layer is spotty and the slab is fairly thin, there is probably not a widespread likelihood of human triggering. 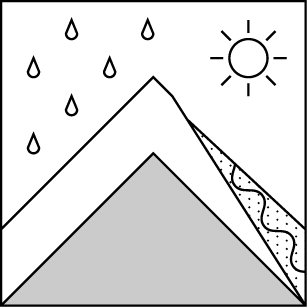 Went into field day with stepping back/assessment mindset. I avoided avalanche terrain due to uncertainty about persistent slab problem.